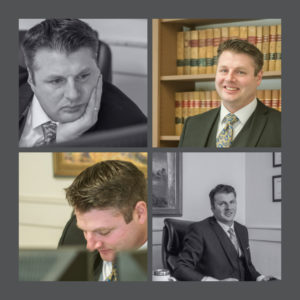 Andy Delaney wants to change the way the world thinks about law and lawyers.  He believes that lawyers have a duty to improve society.  He loves coming to work each day and helping people from all walks of life.  Andy is committed to the firm’s mission—to make a positive difference in our clients’ lives and in society as a whole. Because of this belief he helped form and for more than two years chaired the Vermont Association for Justice‘s Public Service Committee—a group of Vermont trial lawyers who contribute to their communities through volunteer and charitable activities that serve the public good.

. You can read his most-popular “law review” article—a semi-humorous tax-law piece—here. It was published in the ASU Sports and Entertainment Law Journal in spring 2011.  Andy’s article about social media in litigation was the cover article

for the February 2013 issue of the New York State Bar Association’s Journal. His work has been cited in Senator Tom Coburn’s (R-OK) Wastebook, as well as multiple online and print publications.  He has been interviewed on Midpoint and Anderson Cooper 360 regarding the NFL’s tax-exempt status.

Andy is also a regular contributor to and the editor-in-chief of the Supreme Court of Vermont Law Blog.

During law school, Andy also clerked with the Office of the Vermont Attorney General in the Criminal Division, handling several criminal appeals. During his clerkship, he argued before the Vermont Supreme Court under Vermont’s student-practice rule.

Andy is a past president and a member of the Bethel Area Rotary Club. Andy is the past Chair of the Bethel Planning Commission. He was a long-term resident of Bethel and involved in many Town volunteer activities. Andy teaches law courses at CCV.  Andy and his wife recently moved to South Woodbury with their three dogs and a cat.