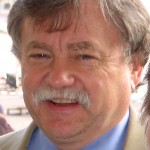 Charlie Martin has been practicing law in Vermont for 40 years. He has successfully advocated for the rights of central Vermonters in all types of civil and criminal litigation. Charlie now oversees part of the Defender General’s program, and concentrates his practice on private civil matters, including  family law, employment issues, and private criminal defense.

As an appellate advocate, Charlie has argued over 130 cases before the Vermont Supreme Court.  He has won several cases of significant importance.  A small selection of those cases can be perused by clicking on the links below:

Charlie and his long-term partner June are world travelers that have visited many countries over the years. This past decade included a trip to India, Italy, Germany, and more recently, a camping trip to the eastern Canadian provinces.

Charlie is a Civil War scholar and will happily discuss the subject for hours. He has participated in many reenactments over the years.